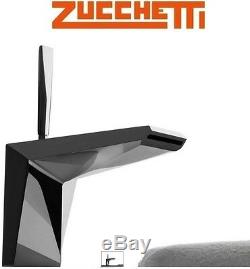 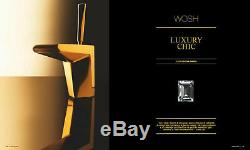 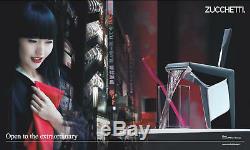 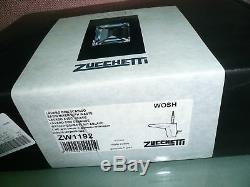 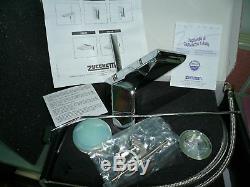 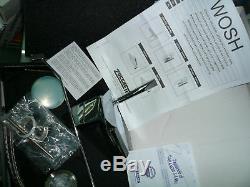 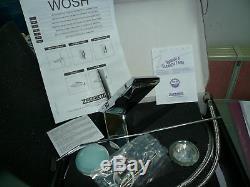 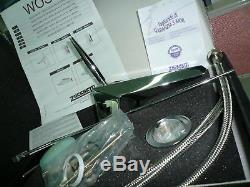 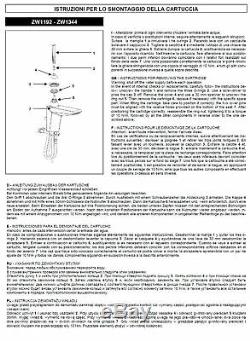 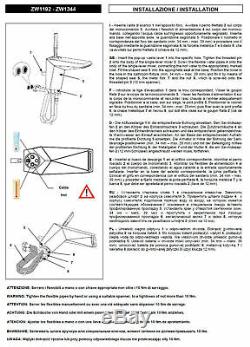 Zucchetti "Wosh" ZW1192 single lever basin/sink mixer with 1-1/4 pop-up waste set and flexible hoses. A long story The roots of Gruppo Zucchetti are sunk in solid family tradition. Three generations have followed on since 1929 when Zucchetti Rubinetteria was founded and consisted in industrial tap and valve manufacture. At the end of the 40s Mario Zucchetti became head of the company and his steady hand led it to success.

Over the same period it was decided to change production over to chrome-plated domestic sanitary fixtures, exploiting the post war reconstruction period. In 1970 the group second company was established, Zucchetti Mario Spa, which specialises in hot brass forging. Omez Spa, dedicated to moulding of plastic items, was established in 1983. The last acquisition is really recent, beginng of 2007, and concerns the company Kos Spa that produces design bath tubs and shower cabins. Among its various success stories it is hard to forget Zetamix 6000, the first mono-block mixer taps made in Italy, in 1975, or Isystick the world first mixer to be fitted under the ceramic surface, dated 2001. Zucchetti today The company is currently run by the third generation: Elena and Carlo, who are continuing the company tradition of constant evolution and are responsible for its most recent success stories: Isy, Aguablu, Soft, Pan, Bellagio. These lines interpret the Zucchetti philosophy perfectly, where design and technological innovation blend together to produce items that represent a point of reference all over the world. (Libanon, 1948) graduated in 1973 from the national academy of fine arts of Beirut. He was particularly interested to the definition of internal spaces, he extends his professional activity to france, italy, greece, japan and the usa. In paris and milan he studied and experienced in the field of furniture design which he considers an important part of a coherent project in living culture. In 1978 William Sawaya moved to Italy and established, together with Paolo Moroni, Sawaya & Moroni architecture and design office, and in 1984 they founded Sawaya & Moroni.

Contemporary furniture, where he directs the artistic and project activities. He joins various personal and collective art and design exhibitions. Occasionally he also designs for other companies like SwissAir, the Fifa, the museo Bagatti Valsecchi, heller. His work has been published on various design and architectural books, magazines and newspapers, his work is present in various museums as well as in public and private collection. Water is a dynamic matter which is tamed behind the scenes by increasingly sophisticated engineering systems, enclosed in objects that have become its mediator with architecture.

This is expressed perfectly by the entire Zucchetti high-end collection WaterWords, which is now enhanced by the new "WOSH" range, designed by the architect William Sawaya. Unique, special objects, which attract the eye and whose intrinsic preciousness makes them stand out. A highly distinguished project in which the idea of the designer is evident, underscored here by the extreme statement of refinement and luxury of these architectural objects for water, precious, faceted and inspired by the hardest stone par excellence, the diamond. I was asked to design a collection of taps (my first experience in this field) that would somehow manage to include both the anti-minimal and anti-monomaterial characteristics, that I so cherish. Once I had completed my research efforts, I initially thought of streamlined forms encrusted with rhinestones, but later my thinking shifted in the direction of bold, faceted geometric volumes which, thanks to their gem-like brilliance, would evoke a sense of luxury and opulence, far removed from the stark, stereotypical and downright boring shapes that have long dominated in this sector.

William Sawaya The reason why Zucchetti chose Sawaya to create another new and important collection is summed up by the thoughts of the company's artistic direction: Quality and functional excellence converse with the culture and design ability of one of the most important interpreters of international design: in this sense, WOSH, designed by William Sawaya, interprets contemporaneity coherently with requirement. The architect's great ability to interpret tendencies and the complex nature of his design were the reasons for which we chose to ask him to design the new collection. We also believe that William Sawaya represents that rare value in the scene of international designers capable of combining Western and Eastern cultures, always coherent in his poetic, elegant, captivating and sensual definition. Ludovica+Roberto PalombaThe Wosh project enhances Zucchetti's WaterWords collection to cover a further formerly unexplored area of style.

A collection created for the well-educated, well-informed, international user, with the cult of the "self", who chooses according to intrinsic needs rather than to show off, and who knows how to recognize perfect technical functionality combined with aesthetics. Project surplus for aging stock clearance sale. Image is for diaplay purpose only and may different from actual product appearance. Otherwise, we reserve the right to re-list the item and go through the Unpaid Item Dispute process. Actual transit time varies due to local postal service traffic schedule. Thus, you will be responsible for such charges, if any. Gmail dot com to initiate a return within 7 days of receiving the item. We are always here for you, offering friendly, comprehensive customer service every step of the way.

Please do NOT leave negative or neutral feedback without any contact. We will do the best to work out all situations.

Communications is important to me. Take a look at my other items. The item "Zucchetti Wosh ZW1192 Single Lever Basin/Sink Mixer withPop-up Waste Set NIB" is in sale since Saturday, June 18, 2011.

This item is in the category "Home & Garden\Kitchen Fixtures\Kitchen Faucets". The seller is "arnbdr606" and is located in Hong Kong, none.

This item can be shipped worldwide.