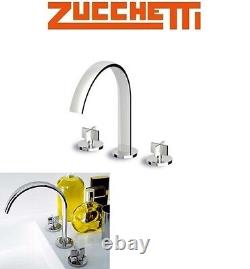 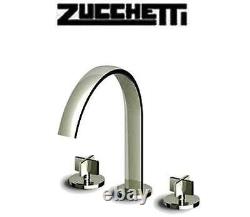 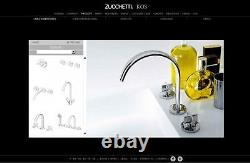 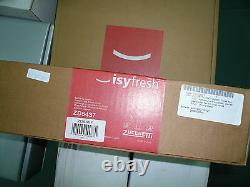 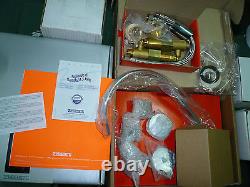 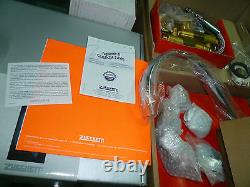 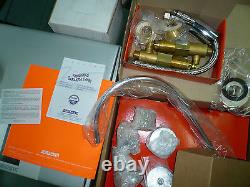 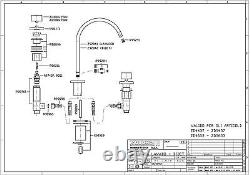 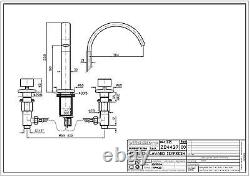 Zucchetti "Isyfresh" ZD5437 Three-Hole Two Cross Handles Anti-splash Sink mixer with fixed spout and flexible tails. A long story The roots of Gruppo Zucchetti are sunk in solid family tradition. Three generations have followed on since 1929 when Zucchetti Rubinetteria was founded and consisted in industrial tap and valve manufacture. At the end of the 40s Mario Zucchetti became head of the company and his steady hand led it to success. Over the same period it was decided to change production over to chrome-plated domestic sanitary fixtures, exploiting the post war reconstruction period.

The last acquisition is really recent, beginng of 2007, and concerns the company Kos Spa that produces design bath tubs and shower cabins. Research, technological innovation and product quality have always been Zucchetti? Among its various success stories it is hard to forget Zetamix 6000, the first mono-block mixer taps made in Italy, in 1975, or Isystick the world? First mixer to be fitted under the ceramic surface, dated 2001. Zucchetti today The company is currently run by the third generation: Elena and Carlo, who are continuing the company tradition of constant evolution and are responsible for its most recent success stories: Isy, Aguablu, Soft, Pan, Bellagio.

These lines interpret the Zucchetti philosophy perfectly, where design and technological innovation blend together to produce items that represent a point of reference all over the world. Recherché and elegant, Bellagio reflects the luxury that surrounds it with its slinky geometry. Revealing an aristocratic, exclusive, "dolce vita" style, Bellagio is a citizen of the world even with its quintessentially Italian name, and powerfully reflects the industrial reality that created it.

Despite its masculine name, Bellagio is female, and if we had to describe her, she would certainly be cosmopolitan, cultured, refined, eclectic, vain, and above all... Matteo Thun was born in Bolzano, Italy, in 1952, studied at the Salzburg Academy under Oskar Kokoschka, took his degree in architecture in Florence in 1975 with Adolfo Natalini and moved to Milan in 1978, where he met and started working with Ettore Sottsass.

In 1981, he was a co-founder of the Memphis group, the design movement that so shaped events in the eighties. The next year, the Vienna Academy for Applied Arts appointed him to the chair in product design and ceramics. Leaving Memphis, he founded the Studio Matteo Thun in Milan in 1984 and served as Creative Director with Swatch in 1990-93. Matteo Thun has won the ADI Compasso d'Oro Award for design excellence three times and was shortlisted again for the Girly product line for Catalano in 2004. His Side Hotel in Hamburg was chosen as Hotel of the Year in 2001, the Vigilius mountain resort won the Wallpaper Design Award in 2004 and the Radisson SAS Frankfurt was chosen as the "best hotel opened in the year" in the Worldwide Hospitality Awards in 2005.

Matteo Thun designed the new look for the façade of the Palazzo del Cinema during 61st, 62nd and 63rd editions of the Venice Film Festival, in September 2004/05/06. He was inducted into the Interior Hall of Fame in New York in December 2004 and is a member of RIBA, the Royal Association of British Architects. Project surplus for aging stock clearance sale.

Image is for display purpose only and may different from actual product appearance. Otherwise, we reserve the right to re-list the item and go through the Unpaid Item Dispute process. Actual transit time varies due to local postal service traffic schedule. Thus, you will be responsible for such charges, if any.

To initiate a return within 7 days of receiving the item. We are always here for you, offering friendly, comprehensive customer service every step of the way.

Please do NOT leave negative or neutral feedback without any contact. We will do the best to work out all situations. Communications is important to me. Take a look at my other items. This item is in the category "Home & Garden\Kitchen Fixtures\Kitchen Faucets".

The seller is "arnbdr606" and is located in this country: HK. This item can be shipped worldwide.